I continue to look for an edge, not a cure, for dealing with OCD.

I can recall doing drills in after school soccer practice during elementary school. During this time period, it was common for kids to wear tee shirts with college logos and names printed on them. My mind became engrossed with the number of syllables of each school. Over and over I would say these names to count and recount the number of syllables in each school. Schools with a particular even number of syllables were grouped together and labeled as good or acceptable. My mind seemed to thrive on this type of counting activity. Around this same time frame, I can remember being transfixed by the alphabet which hung over the chalk board in the front of my grade school class. Almost endlessly, I would look at the letters and make patterns and count the number of consonants between vowels. My mind did not know how to shift gears, I would fixate on my mental gymnastics and frequently not pay attention to other more appropriate class room activities. As I understand OCD, onset is usually in the late teens and early twenties. There is usually a lag between first engaging in repetitive mental gymnastics and having overt symptoms severe enough to qualify as full blown OCD. This time period can be considered the prodrome phase. I often wonder if proper early intervention would have prevented the continually spinning wheels of OCD I came to endure in later years.

Other events during this period of life seemed to help shape the form my OCD would take in future years. I recollect rifle shooting out in the desert near our home. I enjoyed shooting tin cans and bottles with a 22 caliber rifle. My aim was often true and I found the activity exhilarating. One Saturday, a small propeller plane flew over the area where we were target shooting. With a quick thought I wondered if I could hit the plane and bring it down. On one hand, it was a moving target and would be a challenging feat. On the other hand, I was morally revolted by how I could use a vehicle transporting humans for target practice. Was I lacking a conscious? The thought provoked extreme anxiety. How could I think of such a gruesome thing? What was wrong with me? I must be the most heinous person alive. In my religious upbringing, thoughts were nearly as important as actions.For as he thinketh in his heart, so is he” – Proverbs. I really believed these teachings. Somehow I had become an irredeemable murderer. In later years, I would learn about the cognitive distortion of thought/action fusion but as a 12 year old I lacked this understanding. Murder was unforgivable. No need in asking for forgiveness. I was a lost soul. Many times I tried to push this thought away and force it from my mind. Yet, the more I engaged in thought suppression the worse my anxiety became.

A year or two passed before I can recall my next encounter with this theme. I was involved in the local boy scout troop and we would often go camping over the weekend. We had planned on camping in the nearby desert and also target shooting for fun. After waking up on Saturday mourning and cleaning camp we set up an area to go target shooting. I remember wanting to try shooting one of the pistols as my prior experience had been exclusively with a 22 caliber rifle. Gun safety was stressed by our leaders and I took their counsel to heart. Staying behind the line of fire was emphasized for those not shooting a firearm. I remember shooting the pistol and admiring my placement on the target. As I did this, one of the other scouts took a step forward from his position and would have been slightly in front of where I was standing. For some reason, it felt like I had shot this other scout. He had stepped across the line and I had a mental flash of somehow shooting him. This episode produced more guilt than the previous incident with the airplane. I was older now and should have more thought discipline.  This was up close and personal. A real human within 15 feet of me, not some far off airplane. Needless to say, I tormented myself repeatedly for this incident. Why did I have these thoughts? There was no end to my speculation.

These are a few of my early experiences with OCD. It has taken different forms throughout the intervening years. The OCD Stories and podcast have been a remarkable help for me in this journey. I have transitioned to a point of satisfaction and peace I didn’t think was possible. Am I symptom free? No. After a million OCD beat downs, I have accepted this is a chronic disease. But I have made progress with my symptoms. Five years ago, I never would have envisioned being off an SSRI. I am able to function without an SSRI thanks in part to Inositol, N-AC, and SAM-E. My journey continues. Stress needs to be managed. Improvements can be made with meditation and sleep patterns. I continue to look for an edge, not a cure, for dealing with OCD. 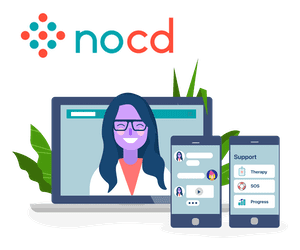