The lights were low, the band was playing, and people all around me were praying. My friends seemed to be experiencing God in powerful ways, but I sat in the pew, lost in confusion. I could not escape the mental torment that had become my reality. As I struggled through the endless twists and turns of delusional thinking, a friend of mine came and sat next to me. I shared my frustration with him: “I feel like I’m lost in a maze…a confusing maze of thoughts…and I cannot find the exit.” He responded in a reassuring voice: “Sometimes, Nathan, the only way out is up.”

From early on, my childhood had been characterized by strong, stable Christian values. However, when I graduated from high school and went off to the University of Michigan, I began to fundamentally question everything about my beliefs. I had an endless stream of doubts, and as my spiritual foundation began to erode, I also found myself grappling increasingly with irrational, paralyzing fear.

As the zeal to “find the answers” was eventually replaced by disillusionment and despair, my thinking patterns and behaviors became increasingly obsessive. Before climbing into bed, I would turn off the light. Then I would turn it back on. Then off again. For some reason, I thought that I had to turn the light off the “right” way, and every time I got it wrong, I had to do it again. Other behaviors were equally strange. At times, I found myself jumping slightly off the ground whenever I had an immoral thought. I also began to cough or tense up my body repetitively as feelings of anxiety increased. Negative mental associations dominated my thinking, making daily tasks nearly impossible.

In my own mind, I was constantly at the mercy of a tormenting labyrinth of contaminants. I went through bottle after bottle of hand soap. Every time I touched something that was “contaminated,” it meant another trip to the bathroom to wash my hands. During a summer internship in DC, my small townhouse bedroom became a chaotic mess as I desperately attempted to avoid “contamination” from various items. The floor was speckled with loose change, pieces of candy, and small bits of paper. I had to sit in the corner and strategize how to get across the room without touching anything that was potentially “harmful.”

In particularly dark moments of fear and psychological torment, I became completely paralyzed. Holed up in my room, I was chained in a mental prison that I could not escape. Perhaps the worst spell of paralysis took place on the first floor of the DC townhouse. Fear was closing in around me like a boa constrictor, and I could not move. I twitched and jerked in small furtive movements, but I could not seem to go anywhere. For perhaps hours, I stayed in one spot between the dining room and the living room, locked in a stronghold. First I was standing, then eventually sitting, and all the while, I wanted to scream at the top of my lungs, but I could not scream. I wanted to cry out in anguish, but I could not cry. All was quiet on the outside, but my soul was being brutally and mercilessly tortured. I don’t remember how I finally escaped; I probably came near to collapsing from pure mental and physical exhaustion. 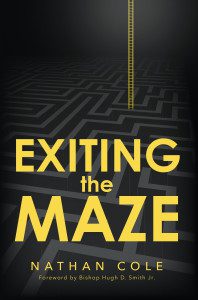 After years of psychological anguish, I finally gave up my emotionally-charged rebellion against God. I fell to my knees, surrendered, and said, “God, I just want to know You for who You are.” In His mercy, He began to minister to my spirit through the story of Peter walking on the water to go to Jesus, and this story became a cornerstone of my recovery.

In the story, Peter was stuck in a boat that was about to capsize in a terrible storm. Jesus, however, was walking on the water, and Peter realized that his best option was to attempt what Jesus was doing. He chose to step out on faith, and when he stayed focused on Christ, he soared above all physical limitations and achieved the impossible. This story became a very real part of my everyday experience. The waves of fear and confusion were constantly crashing around me, and I had been trying to cling onto the boat for dear life. But I began to take small steps of faith and slowly pushed the boundaries of what I thought was possible.

As God took me through the healing process, He began to elevate my thinking. The dark, irrational labyrinth that I had been winding through was relentless and unending, and the only way to escape it was to rise above it entirely. My intellect alone could not conquer it; I could not reason my way out of it. I had to transcend my finite rationale and allow God to take me higher in Him. When I ascended to a new plateau of peace in God, the enigmas that I previously contended with were left in the basement of virtual insignificance.

The manner in which I experience life today would not have been possible just a few years ago. The mental clarity, the emotional development, the spiritual consciousness — all of these were mere fantasy, but thanks to the grace of God, they have now become a part of my reality. Fear and anxiety continue to dissipate as I discover what it means to love and be loved by God. In many ways, my journey thus far has been about learning how to look up — to turn to God in the midst of madness — and I have experienced the profound peace that comes from exalting God above every quandary and complexity.

Nathan Cole struggled with OCD for several years while a student at the University of Michigan. However, through faith and loving support, he was able to overcome this diabolical disorder in some very significant ways. He is the author of Exiting the Maze. The book can be found on Amazon, in both print and Kindle formats.
Prev