I hope people can relate to it and realise they’re not alone.

20 months ago I was diagnosed with OCD. It was something I could always relate to. Growing up, every time I saw a documentary on TV about OCD it all seemed uncomfortably familiar. I remember seeing a man who couldn’t go to bed until he had arranged the pots on his fireplace in a way he felt comfortable with. He was in agony. I could relate to him but because my OCD wasn’t the stereotypical type of OCD the public are familiar with, I too, never saw my condition as being OCD. I’ve always been tense and sensitive. Never a confrontational kid and always, generally, well behaved at home and at school. I never have liked to rock the boat so whenever things came up in my life which did just that my fight or flight response, I now know, never worked properly for me. I bottled it up and carried it round with me. I was quiet and shut down. People often have referred to me a the ‘quiet one’ or ‘sensible one’ amongst my group of friends which to the outsider it must look like that. However, I did recently hear a quote which said that sometimes the quietest people have the loudest minds. I can relate to that as well. There have been times I can feel myself slipping into my head and becoming anti-social. I dont want it to happen. I want to project myself and show my true self, but sometimes I get lost in thought.

My first real involvement with OCD was when I was 10. Around that time me and friends were making prank calls, sending pizzas to people’s houses, silly stuff, harmless really but no doubt annoying to the people we were doing it to. Then one day I made a prank phone call to the 999 operator. This came back to haunt me, as later that day the operator called back and spoke to my Mother who was furious. “What if someone who was in a burning house couldn’t get through to the operator because of you” or something along those lines were said. Also, I was told my Grandpa, who was my best mate growing up and who died when I was 6 (and also a phone operator for the fire brigade!!!) would’ve been ashamed of me.

I was sent to my room and felt awful. Consequently, I remember developing a phobia to do with phones. I couldn’t look at them or anything associated with them such as, phone lines, phone boxes, BT vans, the number 9 (999). I developed a little routine involving putting both my index fingers together on my lips whenever I looked at something associated with a phone. Why this? I do not know. A couple of years later I remember getting into the routine of having to pray before getting up and going to bed. Having a routine within the prayers to ensure no one (ie, God, Jesus, The Spirit and Holy Ghost) were left out. If I fell asleep I’d have to start again. This was odd as I was not raised particularly religious. My grandmother  was a church warden and I went to the local Sunday school occasionally when I was little but it wasn’t rammed down my throat I don’t think. I remember this making me feel uncomfortable. As if my logic was telling me something wasn’t right about this kind of behaviour. At this time I also got into the habit of not swearing. Quite a good habit but not to the point where even thinking about swearing was a problem. Also, I remember playing cricket on my school field and every time I looked round to turn to take my run up to bowl I’d see a church down the road and the word ‘Satan’ coming into my head. I’d have to look either side of the church to ‘neutralise’ this before running up to bowl. Classic OCD I now know. However, What I also know is that this kind of thinking is creative. The mind is making stuff up within a split second. It’s almost as if you haven’t thought it because the OCD is quicker than if you thought of it willingly.  On the flip side I channel this into music and have always written songs and played the guitar. I’ve got an album called ‘Now Is The Answer‘ for release in 2016 which describes using my experiences in a positive way. Its about hope coming from a dark place. Recently, I wrote a song called ‘The Intruder‘ which describes my personal issues with OCD.

I usually start stuttering when I try to explain it to people, so putting it into a song was a lot more simple. For me, I’m very proud of it but it’s a tough listen at times for me. The version I have is a demo  I recorded on my laptop. I didn’t want to take it to a studio and do a lavish , big production because it just speaks for itself being as it is now in a simple form. I hope people can relate to it and realise they’re not alone.

Listen to more of my music here: soundcloud.com/upsidedownmusic

I was born and raised in Leicester. Big Leicester City fan and music in general. I sing and play guitar. I Perform live solo doing original songs and with my function band The Atlantic's. I live with my wife and we are expecting our first child any day now.
Prev

Recovering From OCD One Day At A Time

Me and My Bully 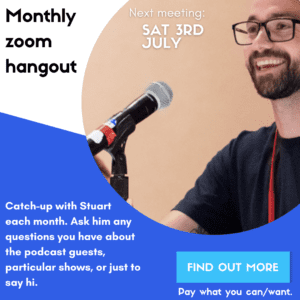