So to everyone out there fighting, welcome to the team.  We’re all in this together.

I’ve always loved writing.  There’s something great about getting your thoughts down on paper (or on screen as the case may be).

Unfortunately, my OCD has infused writing with a great deal of anxiety.  This is because of my fear of plagiarism.  When I write, my mind can become flushed with a major, blown-out-of-proportion, completely irrational fear that I am stealing someone else’s words and ideas.  I could literally be typing down something that happened to me this morning, and part of me would doubt that it was my idea.  Anytime I think of something super clever, a big part of me doubts that it was really original and often I am afraid to share it as my own.

This fits in with one of my main OCD worry themes: dishonesty.  I hate the idea of stealing, cheating, or otherwise misrepresenting what is mine.  This fear easily flows into the writing process.  If I find an article that sparks an idea, I wonder if my idea is too close to what I had read.

Back in high school and later in college, this was a nightmare.  I was the queen of over-quoting, because rephrasing was too risky, even with citations.  When teachers would try and reinforce the importance of citations, my anxiety would rise even more.  Research papers was the bane of my existence.  At one point in graduate school, yes graduate school, it was bad enough that I actually asked a professor if I had to include the APA citation manual in my citations list.  I was seeking reassurance that I wasn’t plagiarizing the APA people by using their format!

But things have gotten so much better.  Yes, the easy answer would be not to write.  Especially now that school is over, there really isn’t much forcing me to write.  But I’m going to write anyway. After undergoing cognitive-behavioral therapy, I know that doing the things that my OCD tells me to be afraid of is what makes me stronger.  That has been one of the biggest realizations in my recovery, that I need to face the anxiety instead of taking steps to avoid it.  It is the most difficult part of healing, but it is also the most beneficial.

I’ve grown so much from writing.  I even write about my OCD now!  Becoming a part of the OCD community online has been very special, because I see how many great people are out there who are fighting a similar battle.  I am able to empathize with a whole group as we all work on figuring this thing out.  We get to learn from one another, and there’s nothing more beautiful than that.  So to everyone out there fighting, welcome to the team.  We’re all in this together.

I am an OCD advocate and the creator behind the Facebook group "OCD Neuroses and Other Nonsense".
Prev

On Avoiding Writing this Essay 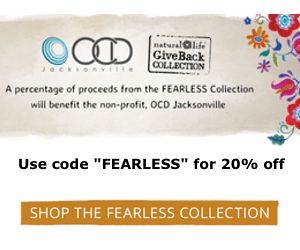