I will start by telling you that it seems like most of our stories start the same way. Something traumatic happened in our brain during a certain point in our life and we paid attention. That is the way I see my story at least and perceive it in others as well. I remember the time when my journey started and the thought that shocked my system. I remember all the thoughts and feelings that came afterwords but as I continue on my journey they are slowly going back to seeds in my subconscious and not the blooming garden of flowers they once were.

I will spare you of all the thoughts and experiences that I have had since that day 6 years ago. I will tell you that I have had GAD for most of my life and never thought much of it. These in my eyes were just fears that I had as a child/young man growing up that scared me. I will however give you an experience of a recent event that happened in hopes that it shows how OCD is OCD, an anxiety disorder.

Ever since the young man killed innocent or not innocent people at the movie theater in Colorado, I have had trouble taking my son to the movies. I remember taking my son to the new Star Wars movie only to have a thought of worry if someone was in there and would do the same. This thought would give any one anxiety but again most don’t pay attention. I’m sure your therapist has said that numerous times when describing how you’re normal. During that movie it was difficult due to the pressure the anxiety put on my chest to breath and sounds growing louder than normal because of the heightened since of awareness. There was a point when we had to leave so I could regroup, but I went back in and finished the movie. I had a choice and I know deep in my soul that to be defeated by a uncontrolled thought would take me in the wrong direction.

This leads me to a bit of success from the weekend. Captain America Civil War was on the agenda and again when we got there the thoughts started. I will tell you that at the beginning of the movie I had the same fear, that someone in there who was going to shoot the place up and the only control I had was to leave. You know, as well as I know that there is no gray in an anxiety induced thought. The man that I saw and thought was an unhappy man who was taking pictures of the theater, only to post to his Facebook that he was going to end it, and be the man who shot up the theater with me in it could not be a film critic who was doing the complete opposite. So there I was overcoming the thought, sitting with the feelings, not trying to force a breath but accepting the breath that I had. It subsided. Now towards the end of the movie a new thought…the man has a grenade!! A sudden rush of new images and thoughts now come on the intrusive train that pulls into the station that is my brain. More uncertainty and more decisions. I continued to sit and each time I continue to sit my brain eventually finds the grey area. It teaches me about the disorder and moves on.

You see during my time at the theater I was able to see that even though my fears/thoughts were scaring me and asking me to jump from the theater and leave I had to stay. It was when I stayed and had the second wave that I realized it was going to keep coming up with scenarios to try and “help” me get to safety and back in control. I have a fear of death at the root of my anxiety disorder mostly because I have not found a way to feel safe with the uncontrolled way or the uncontrolled feelings I may have when I die.

The things that I took away from the weekend were that OCD is just OCD. OCD wanted the guy to have a gun and when I let it go, OCD wanted him to have a grenade. Its no different than OCD telling you that the meat is contaminated and when you let that go it will tell you that your hand is contaminated because it brushed the meat that might have been contaminated. I say to anyone who is new to this experience and just starting their journey or is on the long haul of a tough journey practice these things. First is compassion, chances are your pretty hard on yourself for who you are and how you are. Second would be to educate and learn about others experience’s or tips about what has helped them. And third is my favorite of all, PRACTICE!! Practice makes Practice and if you keep practicing your values then your practice will keep getting better. Good luck

Mary on OCD Recovery, The Arts and Leaning In 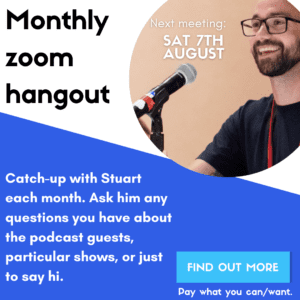