In episode 8 of The OCD Stories podcast I interviewed Jack Pridmore. Jack was in the 2013 BBC documentary ‘Extreme OCD Camp‘. Jack is now focusing on getting his degree, and raising awareness for OCD. 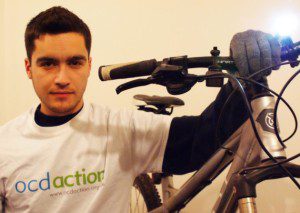 Jack was a pleasure to talk with. He gave some behind the scenes stories of the documentary, as well as kindly sharing his OCD story before, during and after the documentary. Jack shared his thoughts on effective ERP, group therapy and general OCD advice. He blew my mind with his answer to the question “What would you say to some one who has OCD, but you only have 30 seconds to speak with them?”, his answer is testament to his caring character. He also shares his new charity initiative, check it out below. I think you’ll love this episode, let Jack and I know what you think.

Listen on all podcast apps, and Spotify. Or listen direct on our website here

Jack on ERP, therapy and group therapy for addiction (12:10)

How group therapy removes the need to hide your OCD (18:20)

How Jack got on the documentary, and his thoughts on the TV show Obsessive Compulsive Cleaners (33:50)

Find out more about Jack:

To your success,
Stuart and The OCD Stories team

Stuart is a counsellor and psychotherapist for children and young people in the UK. He founded The OCD Stories podcast, a weekly podcast where he interviews some of the best minds in OCD recovery. In 2018 he was given the hero award by the International OCD Foundation.
Prev

So much better than I was