There is a lot of advice I could tell people who have OCD, but the main two pieces of advice are; you are never alone and there is hope.

I merely existed until I was 16 years old. Life for me was a string of anxieties and avoidance, making it impossible to live the life I wanted. The worst bringer of these anxieties was Obsessive Compulsive Disorder.

At 15 years old, my general anxiety was declining and my depression had disappeared. I was becoming who I wanted to be in life. Then life brought me something new.

Intrusive thoughts and images of harm raced through my head constantly. In an attempt to escape, I would mentally repeat phrases until the thoughts went away. That didn’t last long. I turned to pinching myself and banging my head against a wall, yelling and screaming. Anything to get the horrible images out of my head.

I thought I had schizophrenia, if anything. That was the only solution I had to the voices in my head. No one told me OCD was about intrusive thoughts! No one told me OCD was anything more than a cleaning disorder. Not knowing what these thoughts were, I didn’t tell anyone what was going on. I had so much guilt. I didn’t fear that I would act on the thoughts, but the guilt I had for thinking them was immense.

One day, months later, I got the courage to tell my therapist about my thoughts. I told her about my self injury and how distressing these thoughts were. She told me to go straight to my doctor. She couldn’t help. She didn’t know what OCD was either.

The doctor who saw me told me to go to the nearby children’s hospital and see if I could be admitted to a psychiatric hospital. What followed my admission to the psych hospital was a week of learning about mental illness, learning coping skills and meeting teens who were just as sick as me. Although, none of them had OCD.

My ignorance of OCD really shows in a moment with a therapist at the hospital. She asked me how I felt about my diagnosis. I told her I had always joked I had undiagnosed OCD, so it wasn’t that much of a surprise. The only surprise was that I got diagnosed because of horrific intrusive thoughts, instead of my perfectionism.

You see, I had always been quite anal-retentive. I was the type of person to be called “so OCD.” But that uncomfortableness around pictures hanging askew never, ever brought the type of excruciating anxiety that OCD has.

After discharge, I accepted my life of coping. That’s what they taught me, that I need to “cope” with it. They said repeating words until the thoughts went away was a good thing. They told me to challenge the thoughts with logic.

My OCD only got worse for the next six months.

During this time, OCD spread to another area of my life, my faith. I was so involved in OCD logic that it didn’t occur to me that those thoughts were OCD. I thought it was God speaking to me. It’s a voice in my head telling me to do things, what else could it be?

This lead to me avoiding a lot of things in my life. Most of my Scrupulosity revolved around choosing. My OCD told me which things were right or wrong and if I chose the wrong thing, I would go to Hell. The worst possible consequence. The choices could be anything, a cup, a towel, socks, a tv channel, a word to say, an activity to do. I would stand in front of that thing for up to 5-10 minutes, trying to figure out what was right and what was wrong. OCD wouldn’t give a straight answer. It was always tricking me, using new tactics to keep me in it’s trap.

If I did something wrong, OCD would make me pray. If I prayed wrong, I would have to repeat it. I would end up repeating prayers until I cried from the frustration. Praying should never feel this way.

OCD consumed nearly every moment of the day. Even when doing activities to make me feel better, like baking or playing a video game, OCD would get involved.

It got to the point where I just laid in bed all day trying to escape, trying to cope. Anything could trigger my OCD. It was at this point when I went back inpatient in the psychiatric hospital because nothing else was helping.

After partial hospitalization and another inpatient stay, my doctor put me in the brand new OCD intensive outpatient program.

It was unlike any of the other programs I had been in. For once I was in a room with patients and staff who understood and could treat my illness.

For the first time, someone taught me not to cope. Not to use the coping skills and stress balls that had strung me along in my state of anxiety. For the first time, I broke free from the trap of anxiety and avoidance. From that first exposure, I knew this was the way to recovery.

When it comes to beating OCD, doing compulsions and avoiding anxiety (like what the therapists in the inpatient program encouraged) are the worst things you can do. It’s so easy because it makes you feel better in the short term, but really, the compulsions and avoidance only reinforce the anxiety. By asking for reassurance, avoiding or checking, you are telling your brain that the anxiety you feel from the obsessions is necessary. Thus, the next time you get an intrusive thought, you will have that anxiety again. However, if you avoid doing compulsions, you are telling your brain that it doesn’t need to be anxious.

The staff in the OCD program had me make a hierarchy of my fears and taught me how to gradually expose myself to them using Exposure and Response Prevention therapy. I slowly worked up my hierarchy until anxiety didn’t control my life anymore. Looking back, I didn’t get that far up my hierarchy in my six months in the program and there were many bumps in the road, but they gave me the tools to continue recovering for as long as I need to.

Every aspect of that program helped me grow as a person and as an OCD sufferer. It was truly a Godsend.

While I was in the program, I worked on my scrupulosity OCD and my later-developed perfectionism OCD, which had completely replaced my harm OCD. Due to this, when I started getting a different kind of taboo intrusive thoughts, sexual thoughts, I did not know how to handle them.

Because I had no overt compulsions in response to these thoughts, I didn’t know how to prevent them. I wasn’t even sure of what they were.

I once again put off telling my psychologist about them because of their embarrassing nature and, once again, they got worse. Once I asked her for help, she told me to respond to them in the same way that I would to an obsession with overt compulsions.

That’s when it clicked. I had been looking at Exposure and Response Prevention as purely “response prevention” and forgetting the “exposure”! It doesn’t matter what your obsessions or compulsions are, either way you expose yourself to the fear and avoid decreasing your anxiety. Then I started seeing compulsions for what they really were, anything you do to decrease anxiety.

It still took me a long time to really work on my sexual intrusive thoughts because I was afraid to talk about them. I’m still working on this today, but I have made humongous strides with my sexual symptoms.

I’m happy to say I no longer live in fear of scary thoughts. I’m not subjected to believe the thoughts my malfunctioning brain puts in my head, and neither are you.

Although sometimes my religious and sexual intrusive thoughts still get the best of me, I now know the tools to keep the power out of OCD’s hands and in mine. And I am committed to sharing those tools with others through my YouTube channel and blog.

There is a lot of advice I could tell people who have OCD, but the main two pieces of advice are; you are never alone and there is hope.

Being in the OCD intensive outpatient program taught me those truths and it is for that reason that I advocate for people who have OCD.

Stay strong and remember to avoid compulsions, not obsessions.
Thanks,
Kat

Check out my site: https://doanexposure.wordpress.com
Watch my OCD vlogs: https://www.youtube.com/c/shalomaleichem1

Katlyn Hashway is a 19 year old student with a passion for helping people who have OCD. She does so through her YouTube channel, Wordpress blog and various social media outlets. It is her dream to raise awareness of mental illness through public speaking and publish a book or two! She is currently studying psychology so she can someday directly help those who suffer from mental illness.
Prev

Bob Burg On How You Can Succeed Despite OCD

But he had everything to live for! 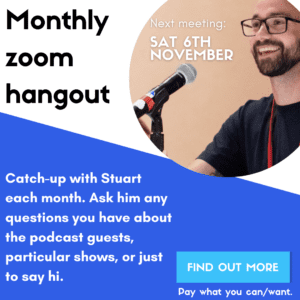